We are taking 2022-2023 enrollment for K-Prep now! We will cap the class at 7 students so sign up today to ensure you don't end up on the wait-list!

Some students choose to dig into a passage of Scripture. Others might present from their senior research for Bible class. However they use their time, it's memorable for them - and for their peers!

Pictured below are three of this year's seniors - known as "the guys" - after their presentations on May 3. The two ladies will present on May 17. 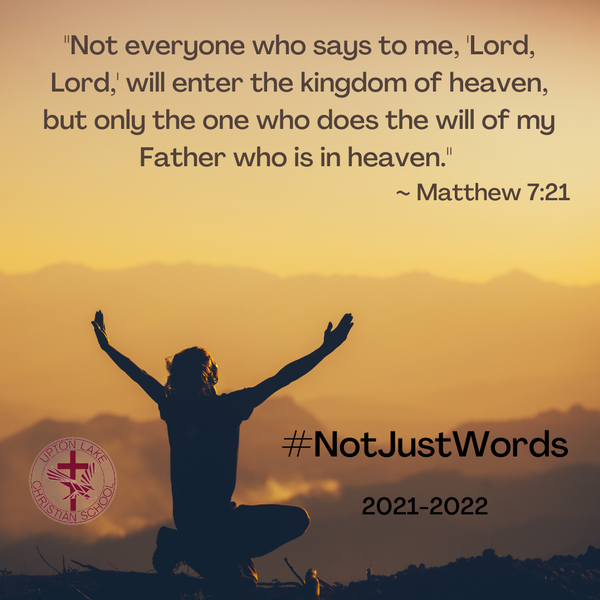 “There are two ways to speak the truth: as bullets or as seeds. Use the truth as a bullet, and you will kill relationships. Plant the truth as a seed, and it will take root and grow, influencing the person in whose heart it was planted.” Gary Chapman

In Mathew 7:21, at the end of The Sermon on the Mount, Jesus challenges the 2 things that provide us with the most assurance of our beliefs and convictions - what we say with emotional conviction and what we do with obvious success - and provides a deeper reason for assurance.

Jesus challenges those who are quick and enthusiastic to call Jesus not just “Lord” but “Lord, Lord,” the double emphasis adds conviction and emotion to the statement. He is NOT downplaying the importance of what it means to declare Him Lord. The word in Greek is Kyrie and is something similar to the Spanish word Senor, which can be translated Lord in the authoritative spiritual sense, like God, or it can be something on the lines of “sir”. Here it seems to be more than a mere “sir”. Romans 10:9-10 parallels with Christ’s teaching here that the heart along with the declaration of “Jesus is Lord” is the sign of disciples. Obviously, we see here that Jesus says, “Not everyone…” which means it is very possible to declare Jesus is Lord, and not have the heart of a follower. When a person states “Jesus is Lord” they are declaring 2 things - a willingness to obey/submit and that there is a personal relationship. How many of us have had the experience as either a coach, expert or specialist and have a person call us coach, but then totally disregard a clear direction? Anyone can say “sure, coach” but it is the player who actually runs the play being told who is living in the reality that he or she is the actual coach.

The second group Jesus challenges has an impressive list of things having been done - prophesying, driving out demons and performing miracles. These people have the words and seemingly the deeds to match and yet they aren’t allowed into the kingdom of heaven either. Again, it isn’t doing good things that is the problem. One of the biggest points made by James in his letter is centered on the teaching that faith without deeds is dead. Doing things for God is a good and necessary thing so what is missing? The relationship is missing.

Jesus might be thinking of Judas here because he would have done all these things but wasn’t in a relationship with Jesus. When Jesus says He doesn’t know these people, it isn’t an identity problem but a lack of intimacy. It is the difference between knowing my wife and children and “knowing” a famous person. Then Jesus says something that seems to be a hard turn in the conversation - “Away from me evil doers.”

What is it about these people that get such a strong rebuke? It is the same underlying attitude that we see in Peter as he rebukes Jesus at the teaching of His impending crucifixion. But Jesus’ kingly authority is directly connected to His role as the suffering servant. We can’t have the kingdom without placing ourselves beneath the cross. Peter obviously changes his position on the need for the cross - but “these people” have not. They are evil because they have no place for the suffering servant who calls them to follow. It isn’t that Jesus is pointing out a lack of perfection - no one would pass that test - but He is revealing a settled direction. Put simply, a Biblical definition of evil is opposition against God and we see it here. They have no real understanding or perceived need for the cross, the very thing God declares to be essential. The verb tense used is the present participle suggesting a continuous regular decision. This is why Paul says he ventures to speak nothing except Jesus Christ and Him crucified. The cross doesn’t nullify His lordship, it proves it.

This is why we need to study and know the word of God, not what we think it says, but what it really says. Why memorize Scripture? Because it forces us to look at a text long enough to get past what we think it says. Why study through an entire book of the Bible and not just hop around from verse to verse? Because it will force us into discussions and subjects we would rather not think about. Once we allow The Bible to be our authority and adjust ourselves to its teachings, then we can begin to see the kingdom of God start to take shape around us because we now know what we are looking for. We need to not only reject the kingdom of the earth, but adjust our vision and expectations to see how the Kingdom of Heaven was brought by Jesus. We need to do more than just dismantle false worldviews, we need to build up the one that fits with reality most truly.

As our students enter a new school year, we will be unpacking Matthew 7:21, and other passages of Scripture, to see how we should live and think. #NotJustWords