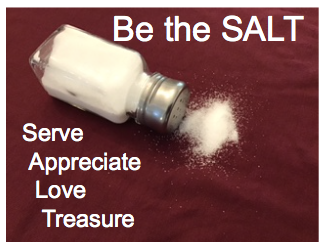 Inspired and encouraged! Those are two words to describe how I felt on Saturday at our Be the Salt Day. A little after 10 am as people were all gathering and chatting in the parking lot I looked up and 'happened' to see a Bald Eagle flying low in a beautiful blue sky! It was so clear to me it was God's way of saying, "Well done good and faithful servants." When I pointed it out, Judah (from Mr. Jordan's class) said, "And that's our mascot!" From that moment to us all gathering for prayer to walking around and seeing all of our students and families working together to socializing over pizza I was isnpired and encouraged. Inspired by how much good there is in our Upton Lake Community and encouraged by a little bit of normalcy in this covid world we have been stuck in.

I watched little pre-k students painting birdhouses for senior homes, 1/2 graders making 60 cards of love and encouragement, 3/4 graders cleaning every chair in our gym, 5/6 graders gathering over 40 bags of leaves at the cemetary down the street, 7/8 graders organizing and delivering canned goods, 9/10 graders scrubbing every inch of our kitchen and 11/12 graders (I didn't see this only heard) beautifying the front of a Crisis Pregnancy Center building. Kindergarten will be packing bags for essential workers this week. It was a beautiful day from the weather to the people!

For 2021-2022, we will meet in person. Virtual learning will be available only for those in 10-day quarantines due to exposure or diagnosis of COVID-19, if they feel well enough to participate.

the Kingdom: the "already" and the "not yet"

Are Christians a people out of time - trying to go back to a more archaic and less enlightened way of life and trying to impose an ancient value system on a modern world? That’s how many in the world view us.

What we actually believe is MORE radical - the Future Kingdom of heaven is time travelling back to us and bringing its perfect values and truths with it. There are definite clashes because two cultures are trying to occupy the same space - the human heart. As we allow the authority of Jesus to reign in our hearts, we find His kingdom is what we have all been searching for. He is a monarch who died for his subjects in order to bring us freedom, which contradicts the monarchs of this world. Monarchs of this world believe, like Lord Farquaad, “some of you may die, but that’s a sacrifice I am willing to make.” We have a limited knowledge of how the future is going to play out, the opportunity to actually shape the kingdom and can help bring it to pass. This will happen as we:

The unexpected nature of the Kingdom

Consider the theme of the Kingdom of God as you look at the Parables in Matthew 13. Here are some truths:

The struggle of the already and the not yet Kingdom

Matthew uses present tense, “The kingdom of heaven IS like…” but also future tense, “Not everyone will enter” or “Your kingdom come.” Which is it? On its way or here? Yes!

Wouldn’t it be nice to say simultaneously “I am already done and not yet done at the same time?” I’d love to respond when Melody calls me, “are you home yet?” with “I am already home” even while I am still 10 minutes out. But she’d only hear “not yet.”

But there are other areas of life where this can be done. In 2010, when Melody was pregnant with Caedmon, I could honestly say “I am a father, but not yet fully.” There are also seasons of life where we are already but not yet something - teenagers are living as adults in many ways, but not adults in other ways.

The already and not yet keeps us both living by hope and encouragement of what already is, yet in humility and dependency on God for what is not yet. The church struggles with this. Paul writes a letter to the Thessalonians correcting their overemphasis on “the Kingdom is here already” by instructing them to work and live quietly. They were sitting around waiting for Christ to return and not working or evangelizing and creating a burden on the rest of the congregation. Paul also addresses the other end of the spectrum when writing to the Corinthians, reminding them to think of what is already true. From lawsuits to sinful abuse of freedom, Paul challenges them to live as citizens of the Kingdom they are already in (1 Cor. 6:9-11).

Next time we’ll continue to look at this conflict of already and not yet.